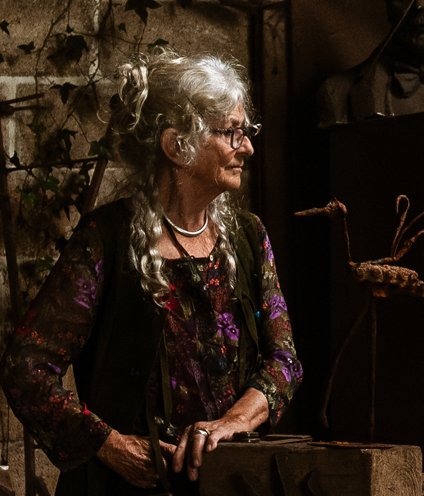 I grew up in St Ives in the 40s-50s. The grown ups were crafts men and women, artists and Cornish fishermen and women.I watched the potters draw up their sensual shapes and smelled the wet clay and the firing kilns.I watched sculptors slowly reveal an image from a block of stone.I watched the fishermen watching the horizon.My playgrounds were the rocks, the sea and the moors.I rolled down the steep slopes where the women dried and bleached their sheets that were held down by stones on the corners, and the fishermen dried, mended and tarred their nets.I watched the fishermen row their dinghies, low in the water with the weight of fish collected from the mothershi-, to be sold on the wharf weighed out on huge brass scales.I watched the old blind blue merle dog running between the wheels of the fish cart as it was pulled around the town selling to the womenfolk.
I watch the funeral cortege winding so slowly through the now quiet lanes of Down-a-long, for the silent mourners to fall in behind..All my life I have been an observer, feeling invisible and I have learned most of what I know by osmosis.My work is my reflection on my take of the world. Most of my images are of women because that is my point of reference. I know Woman from the inside.Birds and dogs are a great inspiration too. I think because they both encompass so many  characters; elegant to the clumsy, funny to the menacing.I began my career as a potter, the smell of the wet clay recalling my childhood. The alchemy of the kiln firing giving constant delight. For twenty years I taught and worked with clay.Then I met Max Barrett. A Cornish sculptor and poet-wild-man. He’d invite artists to sit round his camp-fire, he encouraged me to try stone carving. We went together to Polyphant to collect random shapes of stone and Max would drag my chosen rocks up to my site using a strap around his forehead. And I worked only in stone for two years.Shortly after I got a commission that meant I had to learn to weld. this changed my direction again and frightened me, as had clay in the early years and, later stone. And I realized that not only did a change of medium bring a new  interpretation of ideas but that the fear was part of the process and would bring an edge to the work.These days I am interested in decay…finding old rusty steel and broken things and bring them back to life and then watch them gradually degrade and the birds to nest in them.It gives perspective to life and a sense of continuity…….

Selected publications of images and/or text